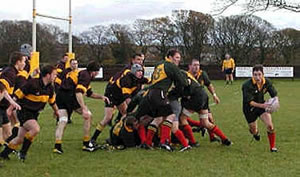 A member of the Scottish Rugby Union and the Glasgow District Rugby Union, Annan RFC offers Rugby at all age groups and to both men and women.

The 1st XV plays currently in BT Scotland National Division 1, and the Ladies in the Scottish Women's National League Division 2.

The 2nd XV plays in the Inter-City 2nd XV Leagues, and the Under 18, Under 16 and S1/2 Teams play in the Glasgow Youth Leagues.

Annan RFC plays at Violetbank near Annan, and the Clubhouse is in the town centre at 17 Bank Street.