History of The Royal Burgh of Annan

The fords or "waths" which cross the eastern Solway Firth were the routes taken by invading armies for more than two thousand years. Their principal routes were then up Annandale and Eskdale.

The Roman Empire was not confined by Hadrian's Wall. The Romans invaded what is now Scotland many times and established large camps and fortifications in Annandale when securing their roads for their campaigns further north.

In the 13th and 14th centuries the Bruce family, who were the Lords of Annandale, took a very active role in the struggle for Scottish independence and the lands on both sides of the border suffered the consequences of outright war between England and Scotland.

Even in the times when both nations were at peace the valleys were subjected to raid and counter raid for more than 200 years as the powerful families on both sides of the border made their living as "reivers". The "reivers" were fast, well armed horsemen with no allegiance to either side who rode by night to steal cattle and any moveable goods. The many fortified tower houses and other structures are a grim reminder of the turbulent past. 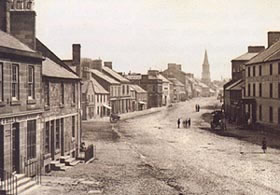 Our history in the past 250 years is one of peaceful agricultural development with some shipbuilding, engineering and sandstone quarrying which is reflected in the district's many fine buildings. In the upland areas, forestry is currently replacing the traditional sheep and hill cattle farming.

The Royal Burgh of Annan is the largest town in the district with a population of approximately 10,000.

The town was made a Burgh of Barony by the Bruces in the 13th century but the charter document was most probably destroyed during the border wars. The charter was re-erected by King James V in 1538. Each year in July, Annan celebrates the Royal Charter and the boundaries of the Royal Burgh are confirmed when a mounting cavalcade undertakes the Riding of the Marches. Entertainment includes a procession, sports, field displays and massed pipe bands. 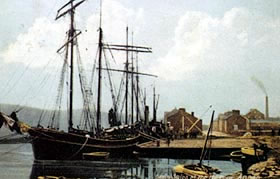 Annan was originally a market town, which developed local industry using waterpower for grain milling and cotton spinning. In the 19th century the port of Annan forged links with Canada and the USA which led to the local shipbuilders graduating from building coastal brigs and schooners to building 1000-ton tea clippers.

Today there is no trace of the shipbuilding industry and only a few fishing boats are based at Annan. Currently the town has an engineering works and a nuclear power station and many people are employed in two large food-processing factories.

The four cooling towers for the now decommissioned Chapelcross Nuclear Power Plant were demolished in May 2007 - view a video of their fall [Windows Media file, 5 MB] >>

Further information about the history of Annan including details of a historic walk around the town can be found in the leaflet below: