One of the easy walks recommended in the booklet Walking In and Around Annan is that along the riverbank from Annan, via the Jubilee Bridge, to the pleasant village of Brydekirk. Licences may be obtained for river fishing. Find out more about Walking, Fishing and Bird Watching in the area.

The road on the west side of the river passes Annan cemetery, containing graves from the 19th Century to date, and including the official war graves of the airmen from R.A.F. Annan. 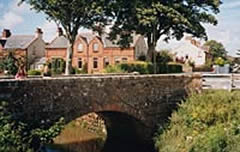 The Sustrans cycle route continues along the coastal roads west of Annan, past the villages of Cummertrees, Powfoot, Ruthwell and Clarencefield. Powfoot was built as a Victorian seaside holiday resort. Nowadays it boasts an excellent golf course, a hotel and the Queensberry Bay Caravan Site (more Golf information).

In Ruthwell village there is the fascinating Savings Banks Museum, commemorating the life and work of the Rev. Henry Duncan founder of the first savings bank.

The museum also contains information on the famous Ruthwell Cross in Ruthwell Church, with carved panels and runic inscriptions of the 8th Century AD.

A kilometre west of Ruthwell on the B725 is the Brow Well where the dying Robert Burns drank the water in an attempt to cure his illness. 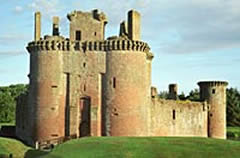 On its way to Dumfries the B725 passes Caerlaverock Castle, besieged by Edward First in 1300, unique for its three-sided design, and one of the most impressive and photogenic castles in Britain. There are replica siege engines, an excellent museum and a teashop.

The nearby Caerlaverock Nature Reserve, most famous for its famous flock of wintering barnacle geese, is an ideal centre for observing many kinds of wildlife.

Dalton is a charming village with meals available at the inn. 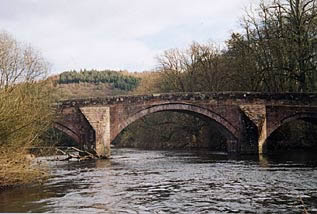 It is a short journey from Annan on the B723 Lockerbie road to Hoddom Bridge, on a tranquil stretch of the River Annan.

It was here in the 7th Century AD that St Kentigern (St Mungo) built his monastery. Excavations have located his small church under the old riverside graveyard, 300 metres west of the bridge.

The 1992 excavations on the slope to the north found the boundary and several buildings of the monastery, including this remarkable stone-lined baptistry, which is seen here being dismantled for future restoration on a suitable site.

The castle dates from the 16th Century and is crowned by an unusual beacon platform, designed to provide fire and bell signals of the approach of English marauders, with similar warning provided by the nearby Repentance Tower. The latter's bell and fire-pan were replaced by a dovecote in the 18th Century.

Across Hoddom Bridge the road forks to Ecclefechan, birthplace of the Victorian polymath Thomas Carlyle.

His statue looks down on the village, and the house built by his father and uncle has contemporary furniture and many souvenirs of the great man. Contact the National Trust for Scotland, r 01576 300666 for opening times. 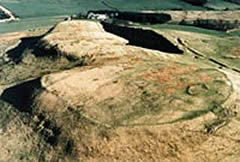 The line of its defences is only faintly visible, but the ramparts of the southern of the two Roman camps at its foot are still prominent. The Romans used the ruined hillfort for practice assaults, the three mounds being platforms for artillery. 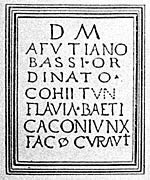 Birrens Roman fort, Blatobulgium, (G.R. 219753) is on the side of the minor road between Middlebie and the Motorway Bridge at Eaglesfield. Its playing card shape and multiple ditches are still prominent. Some of the exceptionally fine sculptured and inscribed stones from the site are on display in Dumfries Museum, including this tombstone of centurion Afutianus.

Eaglesfield Village was the birthplace of the artist W.E. Lockhart RSA RSW. Bar meals and dinners are available. 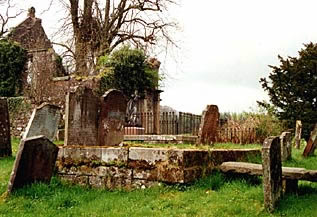 In the ruined churchyard of Kirkconnel on the banks of the Kirtle in Springkell estate is the grave of Fair Helen Irving of Kirkconnel Lea of Robert Burns' poem. (G.R. 250754).

The Merkland Cross (G.R. 250721), in a field next to the M74 at Kirtlebridge, is of 15th Century date and is associated with legends of the slaughter of a military commander.

The village of Kirkpatrick Fleming offers bar meals and has a caravan site, adjacent to which is Bruce's Cave, reputed to be the cave where Robert the Bruce saw the spider. 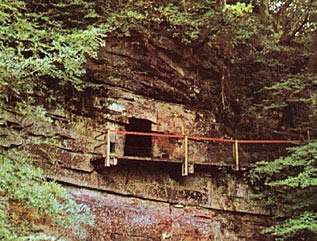 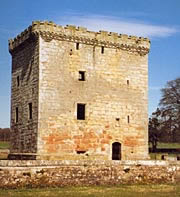 Two of the many border tower-houses, reminders of the endless raids of the Border Wars, are within easy reach of Annan.

Bonshaw Tower (G.R. 243721), the scene of fierce fighting, is still the seat of the Irving clan. (Visits by special appointment only).

Stapleton Tower (G.R. 235689), built by the Johnstones, is empty but kept in good repair by the Vivers family. To the north west of this the giant towers belonging to Chapelcross Power Station have been constructed on the side of the runway of R.A.F. Annan. 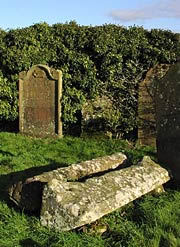 Many of the huts of this Second World War airfield still survive in the village of Creca (G.R. 227704). The three main hangars which housed Magisters, Hurricanes and Typhoons are still used by the Power Station; they are not accessible, but are visible from the B722 road.

The churchyard in the village of Dornock has two early mediaeval coped grave covers propped up by four Romanesque capitals from a 12th Century belfry. The modern burial ground for Dornock is at nearby Eastriggs, a town created in the First World War to provide for workers at the Gretna munitions factory.

The Devil’s Porridge Museum in Eastriggs has been expanded over the past 17 years by the local community, from a small exhibition in St John Church to a larger uninsulated industrial shed to what is now a state-of-the-art museum has something for everyone.Experience life in a World War One Trench and explore the Factory to discover what life was like for the thousands of munitions girls who flocked to work here.
r 01461 40460 for opening times. l www.devilsporridge.co.uk) 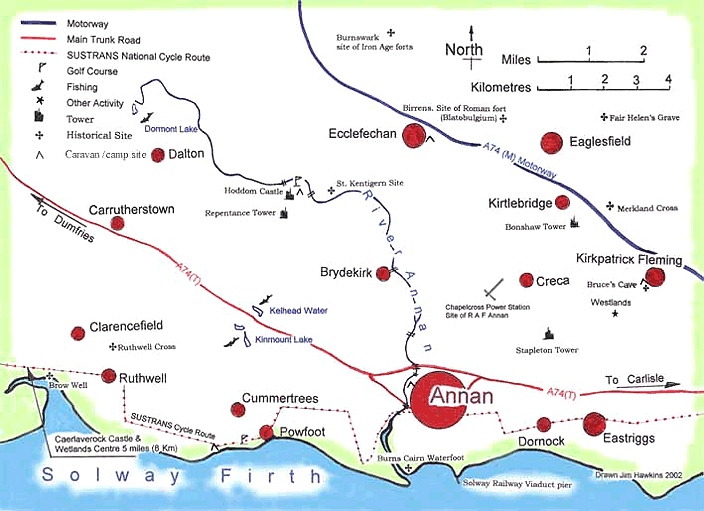