Statue Of King Robert The Bruce 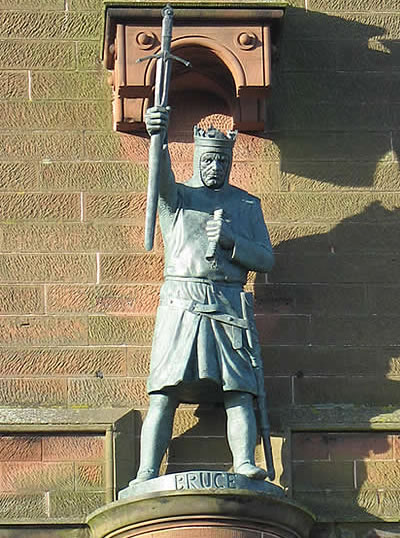 Annan and Annandale have strong historical links with the Bruce family.

In the 13th century they were Lords of Annandale and would have occupied the town's fortified motte and bailey (pictured). Annan's location on a principal fordable crossing of the Solway Firth gave it strategic importance and it was destroyed many times in attack and counter attack during and after the Wars of Independence.

Local businesswoman, Janette Weild, led a project in late 2007 to commission a statue of King Robert to be placed on the vacant plinth on the front of the town's Victorian town hall. The committee raised over £40,000 and the sculptor, Andrew Brown, created a dynamic and imaginative representation of King Robert in his mature years. 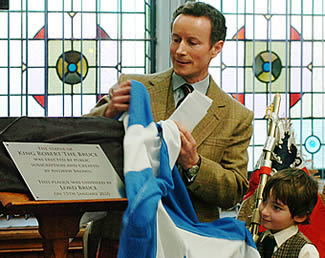 The statue was erected in January 2010 and shows the King as nation builder with the Declaration of Arbroath in his left hand and his sword in the other held in a gesture of peace. The statue both completes the Town Hall and affirms the significance of the Bruce family in the town's history as the place where the family's impact on Scotland began nearly 900 years ago. As Lords of Annandale for some 200 years the family was at the heart of the turbulent border history of that time.

This reconnection was underlined by the presence of Lord Bruce the eldest son of the Earl of Elgin and Kincardine KT, head of the Bruce family. Lord Bruce assisted by his six years old son, Benedict, unveiled a commemorative plaque and in the course of a stimulating speech spoke of the Statue reminding us that King Robert was not only a warrior but also a great statesman and of the remarkable achievement of the sculptor who had caught the King in a very expressive moment and, in that sense, had captured the space contained within him.