Annan Online
« back to The Area 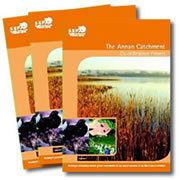 Numerous species of important plants and animals are found in the Annan area - many can be seen within walking distance of Annan, or even in the centre of the town itself.

Although designed and built for people, the town of Annan also supports a diverse range of wildlife. No detailed studies have been done in Annan to date, but it is known that sandstone buildings can quickly acquire lichens and one sandstone church in Wales was found to have over 160 species.

Inside some of the buildings, Pipistrelle Bats find a daytime hideaway; many of them can be seen feeding over the River Annan and local gardens during summer evenings. Noctule Bats are a much rarer sight but are known to use a hollow tree in Everholm Park, one of only a few roosts known for this species in Scotland.

The River Annan is renowned for its Salmon and Sea Trout, but a further 25 species of fish have been recorded.

On the banks, particularly around Brydekirk there are a number of small woods which provide shade and shelter for fish and aquatic insects, fishing perches for Kingfishers, breeding sites for Otters, as well as a habitat for many woodland plants and animals, including Bluebells and Spotted Flycatchers. Grassy riverbanks along the Annan still support Water Voles, a species which has undergone a major decline in Britain.

The saltmarsh, or merse as it is locally known, at Waterfoot to the south of the town is especially important for wildlife. Thrift and Scurvy Grass are flowers typical of this habitat, but the locally rare Hard Grass also grows here.

Oystercatchers, Lapwings and Redshanks all breed on the merse, joined in the winter by many other species including Dunlins, Golden Plovers and Twites.

The remains of the railway viaduct at Seafield provide a good vantage point for watching seabirds passing through the Solway Firth. In the spring Pomarine and Arctic Skuas often fly past.

This area is one of only two on the Solway coast for Ray’s Knotgrass. Sea Spurge and Sea Kale can also be found here and Ringed Plovers nest. During the winter large number of birds gather at high tide, at times including over 1000 Ringed Plovers, 400 Bar-tailed Godwits and 30 Turnstones.

The Solway Mosses consist of several peat bogs scattered across the low-lying plain of the Solway. Some are now designated as the most important wildlife habitats in Europe, but around Annan most were damaged by tree planting or peat extraction before their value was fully realised.

The former limestone quarry at Kelhead is one of the few places in the region to have grassland dominated by calcareous, or lime-loving, species. Common Twayblade and other orchids, Fairly Flax and Barren Strawberry are all found here.

The walks at Hoddom offer the opportunity to see some of the local farmland. Most of it is grassland, of limited use to wildlife, but the drystone dykes, hedges, hedgerow trees and field margins that surround them are extremely valuable for species such as Yellowhammers and Tree Sparrows.

An overview of the surrounding towns and villages ....

Numerous species of important plants and animals are found in the Annan area ...

For detailed information the town of Annan and it's immediate surroundings see, places of interest