Annan Online
« back to The Area

Towns and villages in the Annan area 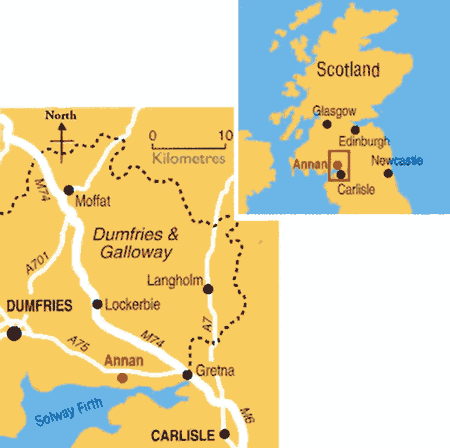 The quiet villages of Brydekirk and Dalton have pubs that provide bar meals and the picturesque estate at Hoddom Castle has a restaurant and camp shop and all make ideal stopping places for the walker or cyclist.

The villages of Kirkpatrick Fleming, Kirtlebridge, Eaglesfield and Ecclefechan are now peaceful, as the north-south motorway has bypassed them. All have facilities for the walker and cyclist and have many places of both historical and literary interest.

Lockerbie has a population of about 4000 and is situated in mid Annandale. It is a market town with strong links with the dairy industry.

The town of Lochmaben with its attractive loch side is nearby. Both towns have cafes and shops. The Forest of Ae, with several off road routes suitable for the mountain biker, is situated to the north of Lochmaben.

Moffat has a population of around 2400 and lies in upper Annandale. This was formerly a spa town and today is well known for floral displays and has many cafes and shops. Close to Moffat is the natural feature known as the Beef-Tub. The Grey Mare's Tail Waterfall can also be found nearby - please note car parking limited.

The village of Beattock is also near Moffat. Both communities are on the Southern Upland Way long distance walking route, which crosses from the west to east coats.

Langholm, with a population of about 2500 is noted for the fine tweeds produced by its weaving industry. These factories were originally powered by water mills on the River Esk. In mid summer, the town's Common Riding takes place when a mounted cavalcade checks the boundaries. The town has pubs, cafes and shops.

The small upland hamlet of Eskdalemuir has a hotel. This district, originally a sheep farming area is now heavily forested. The Samye Ling Tibetan Buddhist temple is just to the north of the hamlet.

Canonbie is a picturesque village situated on the River Esk where bar meals can be obtained. To the south lies "Scots Dike" a 4 mile long earthwork which was constructed in 1522 to settle the dispute over "Debatable Land". Hollows Tower is an example of a fortified house.

The nearby village of Rowanburn was built about 1860 for workers employed in the local coal mines. Major mining ceased with the closure of the main pit in 1922. The Canonbie Coalfields still has large reserves of coal but the seams are very deep. Today the village has awards for being one of Scotland's best-kept villages.

An overview of the surrounding towns and villages ....

Numerous species of important plants and animals are found in the Annan area ...

For detailed information the town of Annan and it's immediate surroundings see, places of interest